Blocknative builds infrastructure to monitor and manage the complexity of transacting on public blockchain networks. Their suite of tools powers transparency and profit for Web3 developers, users, and traders on Ethereum, Binance, Polygon, Fantom, xDai, and Bitcoin. Leading cryptocurrency applications like Curve, Balancer, and Compound depend on Blocknative for their critical Web3 infrastructure.

Extremely high demand and limited block space on the Ethereum network generate fierce competition in the gas fee marketplace. If not executed properly, users can face serious consequences, like missing inclusion in a block, overpaying for gas, or experiencing a failed transaction. This lack of transparency of pre-chain activity can be frustrating to users and often makes or breaks a transaction.

With their extensive mempool database on the Ethereum blockchain, Blocknative partnered with Webstacks to create an interactive tool that would allow traders and developers to gain insight into Ethereum gas fees before initiating a transaction.

The first iteration of the Gas Estimator we built for Blocknative launched in April of 2021, constructed around Ethereum’s legacy gas pricing model.

The design our team created seamlessly fit with the rest of Blocknative’s branding, including elements like dark mode, text font, simplicity, and radiant colors.

The Gas Estimator was divided into 5 confidence intervals: 70%, 80%, 90%, 95%, and 99% probability. This range of estimations gives users with more or less urgency an idea of the amount of gas required for inclusion in the next block.

Correlative feedback colors (green to orange) are assigned to each interval to emphasize their respective accuracy. Gas estimations are updated in real-time with an animation to highlight the constant updating of data.

The second version of the Gas Estimator was released in September of 2021, following the EIP-1559 upgrade to the Ethereum network. The changes to the Ethereum gas fee system introduced a base fee, priority fee, and max fee. The legacy model was still accessible via the toggle in the top right corner. 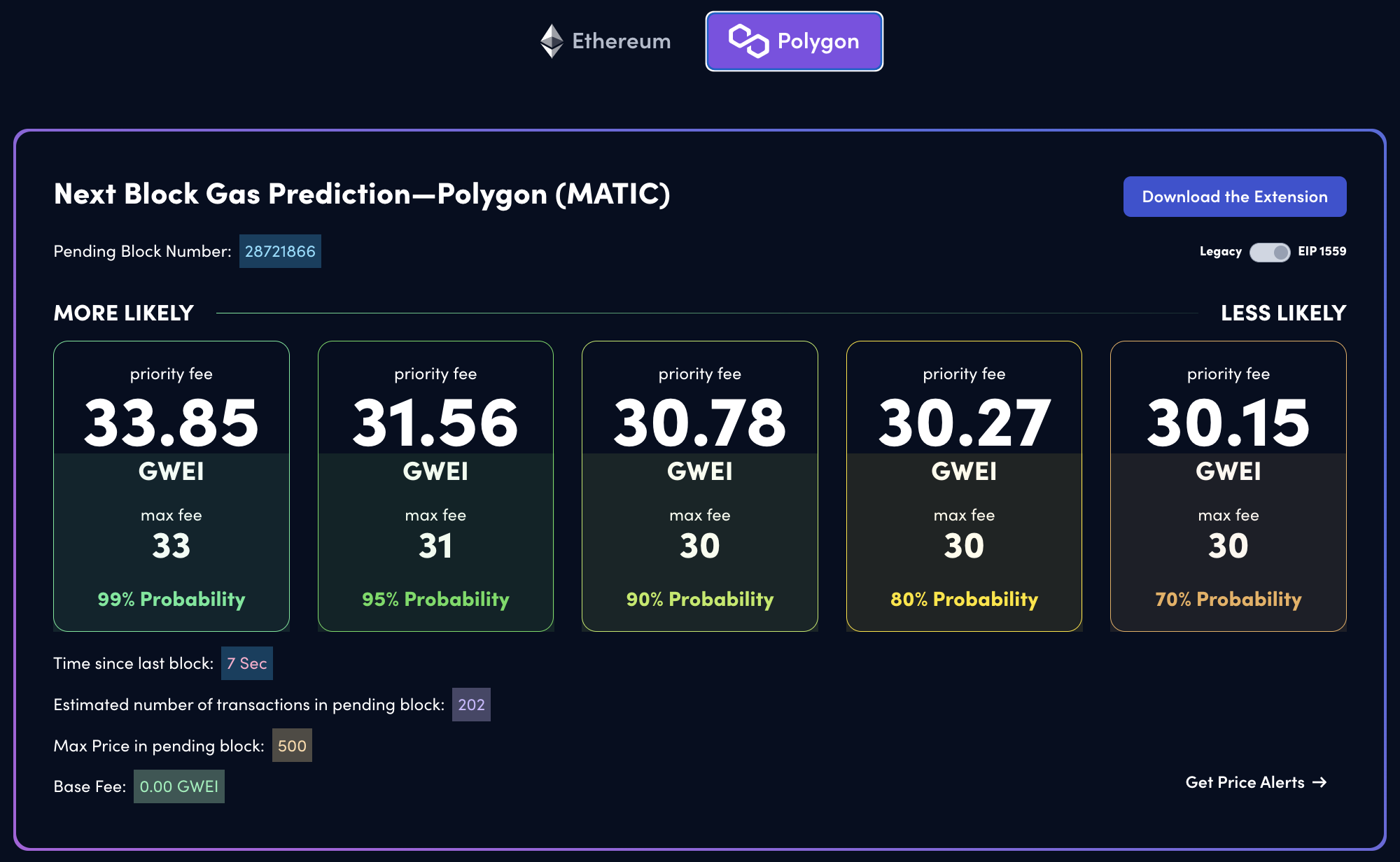 The third Gas Estimator update was released in May 2022 and introduced an entirely new blockchain. With the success of the Ethereum Gas Estimator, Blocknative began plans for extending gas prediction to other leading blockchains. The V3 includes Blocknative’s new partner, Polygon - a popular “layer two scaling solution” that runs alongside the Ethereum blockchain.

Now, Polygon users can access the most accurate real-time gas prices with the Polygon Gas Estimator.

The Gas Estimator was built with a React HubSpot component. While HubSpot is not traditionally built with React, there is a React module that allows engineers to build with their libraries. Overall, this approach led to super efficient speed to market.

Blocknative experienced unprecedented traffic with the Gas Estimator, most notably after the launch of EIP-1559. EIP-1559 significantly complicated the gas model. In turn, the spike diminished users' understanding of calculating gas fees on Ethereum.

To date, the Gas Estimator has over 1.6 million page views with an average session duration of 4.6 minutes.

The Gas Estimator rapidly started ranking for more than 800 keywords, with remarkable positioning for highly competitive keywords. It currently ranks in the top 3 for “eth gas tracker,” “gwei price,” and “Ethereum gas” - queries with keyword difficulty scores between 86 and 88 (on a 100-point scale) according to Ahrefs.

Ultimately, we have associated the success of the Gas Estimator with two key factors:

1. It is Invaluable to End Users and Blocknative

For users, the Gas Estimator delivers continuous, unparalleled value at zero expense. The tool solves a critical pain point that all blockchain developers and traders face and allows for more informed, economical decision-making. Before every transaction, Ethereum (and now Polygon) users can turn to Blocknative to help save money on gas fees.

While ungated content generally serves to boost SEO and increase brand awareness, the Gas Estimator has become a substantial lead generation tool for Blocknative. Many traders and developers who initially come across the Gas Estimator would also gain value from the rest of Blocknative’s products, such as the Mempool Explorer and Gas API.

2. It is an Authoritative Source

Blocknative has established itself as a reliable and reputable source for information regarding gas fees. Not only is their Gas Estimator data consistently accurate, but it is displayed in a distinct, user-friendly manner. Overall, it provides a pleasant user experience and enhances brand equity for Blocknative.

From a metrics standpoint, the Gas Estimator’s URL rating has shown substantial growth and is one of Blocknative’s strongest sub-pages, established as a resource for estimating gas fees, with over 800 backlinks.

The SEO of this page is also effective in a remarkable way. While the page has minimal copy, it still outperforms most other websites related to gas fees. This is because the Gas Estimator is unique and solves users' needs far better than any written content could.

Together with Blocknative, we identified a key issue that the entire Ethereum community was dealing with - estimating gas - and leveraged data to implement a solution that was easily accessible, intuitive, and resourceful for users.

Our team at Webstacks specializes in building unique tools that develop your website into a product, like the Gas Estimator. We see a massive opportunity for more Web3 companies like Blocknative to explore innovative solutions that increase traffic, provide value, and establish topical authority.

If you wish to learn how our team can help you create one-of-a-kind user experiences while increasing lead generation, contact our sales team.

Brought to you by

Did you find this article helpful?