It’s been over a week since Instagram decided to make a drastic change to its layout. Instagram users would agree that the popular American photo and video sharing network shouldn’t be shamed for making updates that support content creators and trends that saw an explosion in entertaining videos on the app. That’s fine. But if it meant having to change Instagram’s UX design in a significant way, then finding a better plan to follow the ‘trend’ without touching the user interface would have been appreciated by daily users.

Imagine every automobile company decided to move the gas pedal to the left side of the driver to make room for a new pedal that triggers the emergency brake. This example may be too extreme, but it’s what’s happening with the Instagram app and its UX design. This particular Instagram update that everyone is most concerned about is shown below (Instagram implemented several updates that I’ll introduce later). 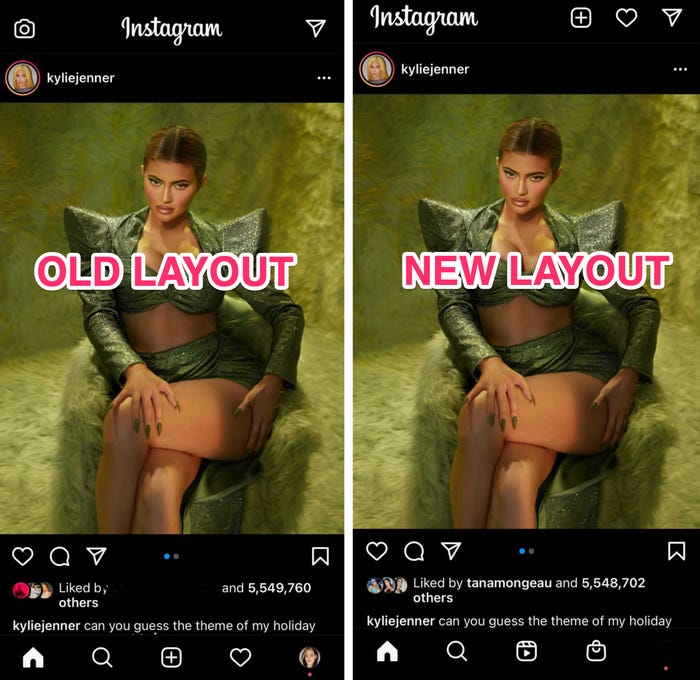 Notice a difference? The original home screen used to have the publish and notification buttons at the very bottom of the screen. The interface has been this way since Instagram was born. Like if 2020 isn’t already the most bizarre year of my life, both buttons were moved to the top right corner of the screen: an unfamiliar place that is owned by the DMs. Now, in place of each button are the shortcuts to Instagram Reels, deemed a TikTok copycat by The New York Times, and Instagram shopping, a new eCommerce space that’ll function as a marketplace. Boohoo! You might be thinking ‘why does it matter so much if almost every product or service implements updates every other week?’ But the underlying concern is that Instagram is now stepping on unfamiliar soil and dragging its users with them.

What the New Instagram Layout Means for its UX Design

Yes! Instagram is now standing on unfamiliar soil while facing ravaging controversy from its users. The relocation of Instagram's notifications button and the publish button has triggered negative reactions from daily users. 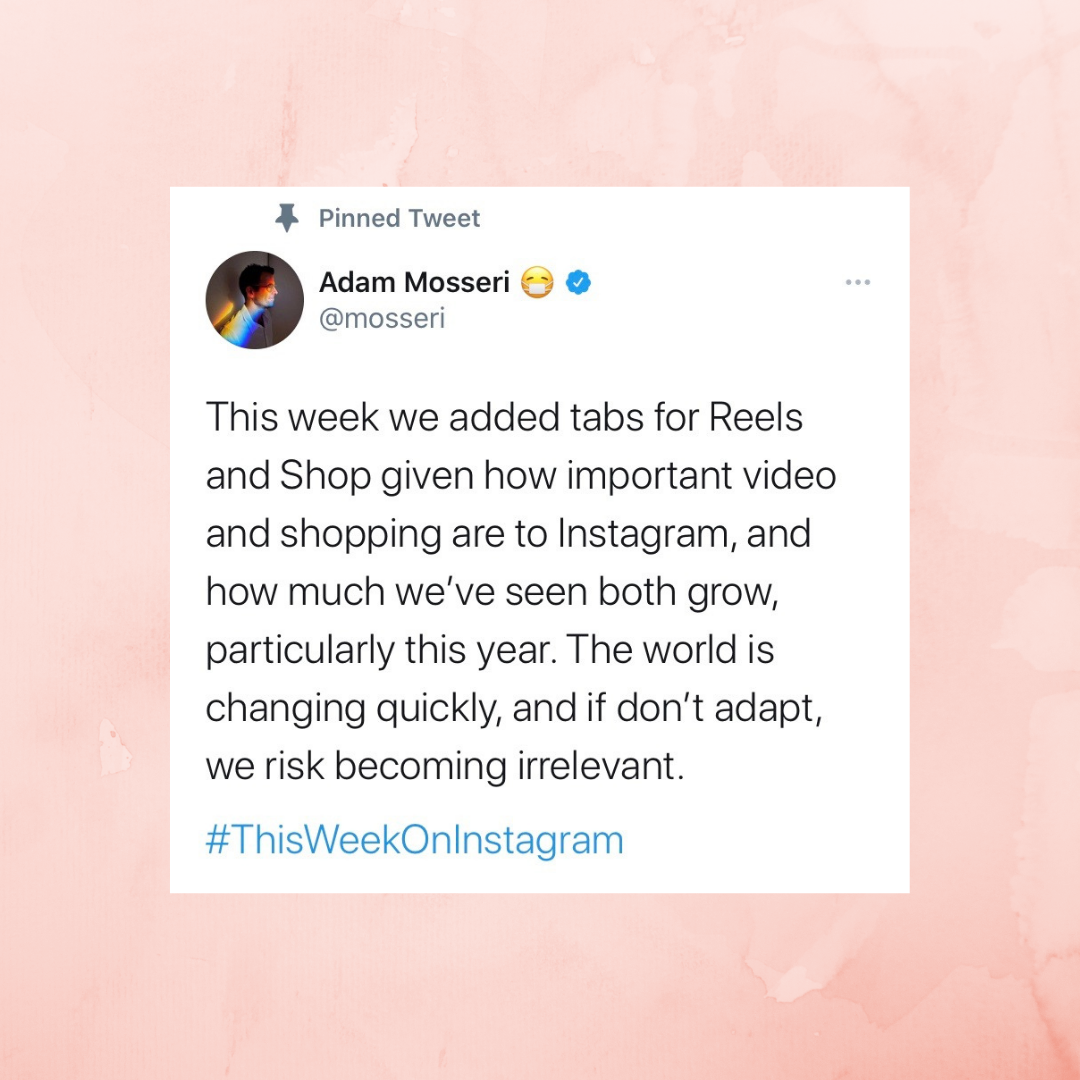 But it’s because Instagram’s new UX design is now prioritizing reels and the shopping marketplace, as stated by the Head of Instagram Adam Mosseri. However, this creates a few problems that simply cannot go unnoticed.

What is UX Design?

UX design refers to the term “user experience design.” It defines any interaction a user has with a product or service.

Sure. One may argue that users are going to have to get used to the new layout whether they like it or not. Unfortunately, it’s not that simple. Users are going to find themselves in a position where they may consider moving on from the app or will decrease their time spent on the app until they’re eventually bored. Or, what Instagram hopes will happen, users will assimilate to the new changes and everyone wins. This may be highly unlikely due to customer churn, as 76% of consumers think companies should understand their expectations and needs. At the moment, it’s clear that Instagram’s new layout does anything but meet expectations and needs. ‘Frustration’ is a great filler word.

“We don’t take these changes lightly - we haven’t updated Instagram’s home screen in a big way for quite a while now,” states the Head of Instagram Adam Mosseri. But no explanation is good enough to hide the fact that Instagram is feature chasing. They’ve forgotten about two important, if not crucial, principles in UX design known in the space of applications: functionality and usability. The functionality of receiving notifications and creating content on Instagram has changed, meaning it’s mandatory to return to the home screen if they want to publish or look at their notifications. This affects usability because users don’t want to return to the home screen every time they want to post or check notifications. For now, Instagram will remain a  feature-chaser until they start adhering to the basic principle of putting usability first.

This question may have been the question heard around the world, or not. But still, it’s a question that sheds light on platforms like TikTok who built their notoriety off functioning as a video sharing platform. Does Instagram ‘reels’ feature have the power to take the throne from the Chinese-owned video platform? Not when you have the likes of Charlie D’Amelio and Will Smith racking up more than 8 billion likes combined since they hit the TikTok scene. 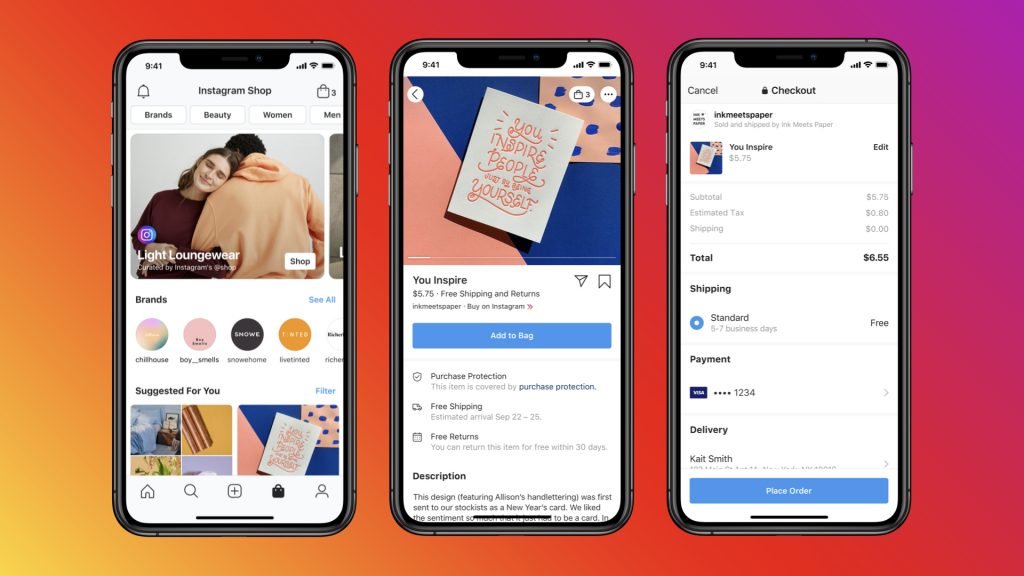 In terms of the new marketplace, a few Instagram users have reported scammers who’ve impersonated merchants. Instagram’s worst nightmare. This is the reason why Instagram users refrained from shopping on the app in the first place. Now, it feels as though it’s only going to get worse. Until then, Instagram will have to hope the TikTok platform returns to China and for the marketplace to solidify a merchant verification process to not tank to the ground. Should’ve stuck to likes and comments (*shrug*). Of the problems I’ve introduced, enticing users to become content creators and business-minded people will be the most challenging. Instagram users who wanted to avoid TikTok and fake businesses have nowhere to run. Countless renegades and scam attempts will surely be on tap.

Other Instagram updates that have nothing to do with UX design seem to be the most promising of the bunch. Instagram has introduced product tags for Instagram ads that’ll allow people to see product details, form a wishlist, or make a purchase when the ad is clicked on. An interesting tool for businesses is the shopping engagement custom audiences tool, giving brands the ability to target people who have shown interest in their content. The last update goes out to those who love the Instagram Live feature. Creators can now broadcast for up to four hours and give them 30 days to save the recording. Other than that, you can read more about every Instagram update in detail on their website.

If you’re like us who has yet to use the reels feature or shop on the marketplace, then you most likely want the old UX design back. 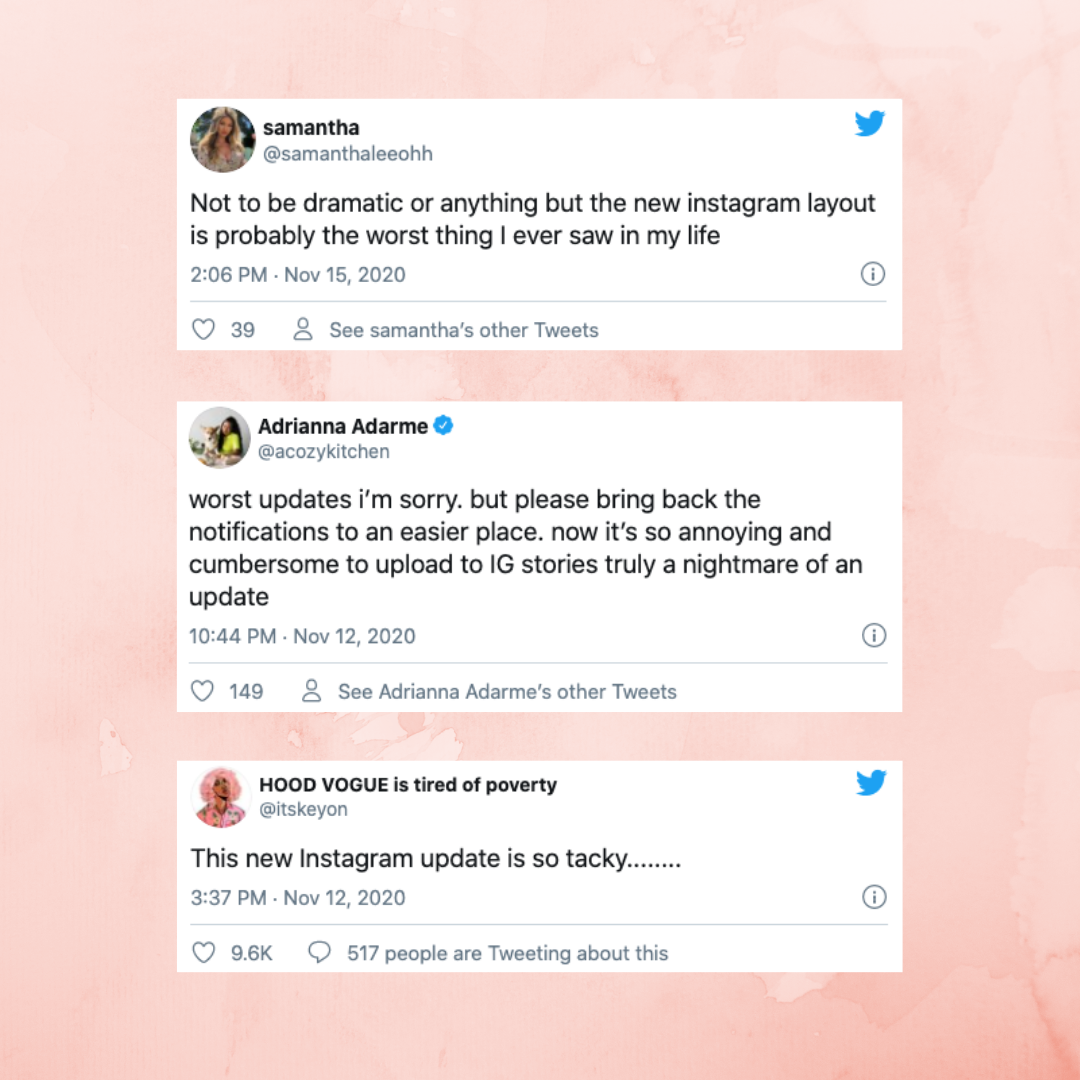 Do you like the layout? Has your Instagram activity diminished or increased? As you can see from the image above, people are not stoked about the new update and are not afraid to express it online.