Meme Marketing: The Power of Memes in the Blockchain Space

To the common eye, memes are just a funny way on the Internet to make a joke and share some laughs with friends.

In this article, we aim to showcase the power of memes, their cultural relevance, and why digital marketers in the blockchain industry and beyond should be paying attention.

What is a Meme?

A meme, by definition, is:

a humorous image, video, piece of text, etc., that is copied (often with slight variations) and spread rapidly by internet users.

But why is this important?

With the rise of NFTs and crypto, meme marketing is becoming more relevant than ever for marketers looking to grow their blockchain marketing skillset. 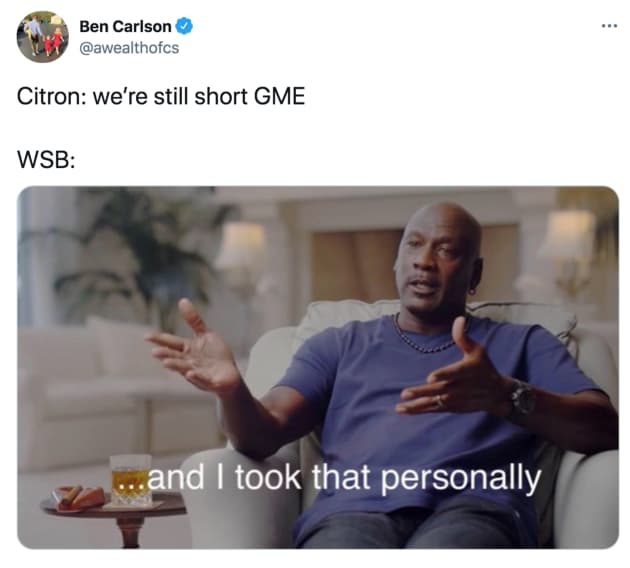 Memes are not just something you send to your friends through text. Memes can galvanize a massive community of strangers on the internet and create massive change.

Let's look at three relevant memes across traditional finance (TradFi) and crypto to see how meme marketing can lead to huge financial gains and losses.

If you’re not familiar with Wall Street Bets (WSB), it is a cult-like Reddit group focused on group trade calls in the cryptocurrency and stock markets.

The group comprises approximately 50,000 active Reddit members, over 300,000 Instagram followers, and was the reason for CNBC’s headline back in January highlighting Melvin Capital’s 53% loss on its short position.

Why are meme stocks relevant?

Hedge funds do not mess around when it comes to money.

So how did a loosely knit group of strangers on the internet, band together to ‘take down’ one of the largest institutional investors in the US stock market?

They did it through building a community, memes, and the principles behind network effects to reach a national audience.

Gamestop (GME) went on one of the most impressive stock rallies in the history of the stock market. The company was destined to fail, and the stock price increase defied every fundamental analysis in the book.

If you’re not convinced that communities and memes are powerful, let’s dive further.

Dogecoin, a cryptocurrency meme token, currently sits at the #10 overall market cap at $29 billion as of September 22nd, 2021.

That’s a lot of money.

So how is Dogecoin, a literal internet meme, sitting above blue-chip cryptocurrency projects like Uniswap and Chainlink?

The power of community and memes.

If you frequent the internet, and more specifically the wild west of Crypto Twitter, you’ve probably heard of or seen something about Doge. Elon Musk has mastered building social currency and has been a huge advocate for the project.

There’s a social movement taking place on the internet that carries value if used correctly. The money speaks for itself.

Pudgy Penguins are available on OpenSea, an NFT Marketplace on Ethereum, and just a few weeks ago were valued at less than $300. They currently are selling for over $6,000, some selling for well over six figures, and were featured in the New York Times.

Although the price fluctuation is volatile, the long-term utility of owning NFTs is still very unknown to investors.

Here's a question: why did George Lucas not take a cut from the Star Wars box office and only wanted to merchandise rights?

Because he knew in the long-term, he would make so much more; and he was right.

Blockchain in and of itself is a relatively new phenomenon, and community and memes are a core foundation of the crypto community. 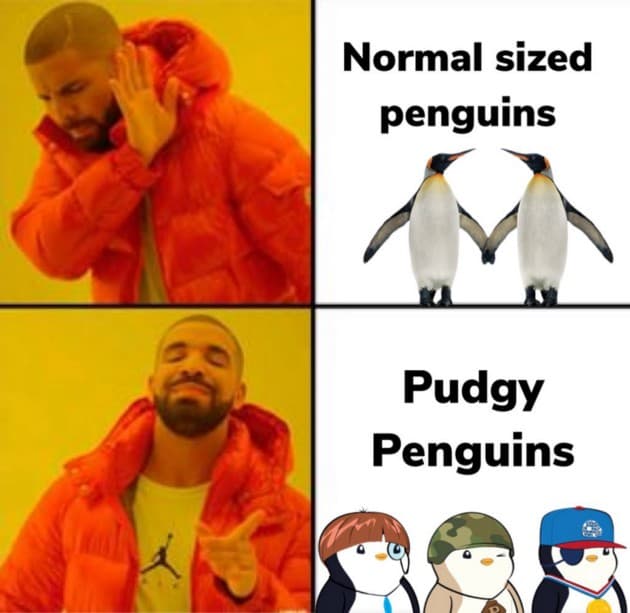 The true value of these NFTs will be the groups that buy into these projects not looking for a quick flip, but to build the brand and community.

The beauty of owning NFTs gives you the power to monetize off the brand. You can make merchandise, T-shirts, TV shows; the possibilities are endless.

If someone was to say, create a Pudgy Penguins TV series that was featured on Netflix, what do you think the price of the actual NFTs would be?

This is the true power of blockchain and community; the opportunity to come together and build.

Another aspect of Pudgy Penguins is their ‘meme-ability’ and a new phenomenon, the Profile Picture Effect (PFPE).

The Profile Picture Effect is the organic growth a project gains based on the number of users using the project as their profile picture.

You can browse through thousands of projects, but few rival the inherent cuteness of the art.

Combine meme-ability with the PFPE and being featured on major news outlets, you have a perfect storm for people wanting to be a part of the community increasing the overall value of each NFT.

In this article, we aim to showcase the power of memes, their cultural relevance, and why marketers should be paying attention.

By now you can see that memes and the network effect are extremely important in the ever-expanding digital world.

One not only has to be in tune with internet culture but how to utilize this authentically and organically to grow their brands.

As marketers, we must always be paying attention to new trends, and mastering how to best use them to effectively beat out our competition.